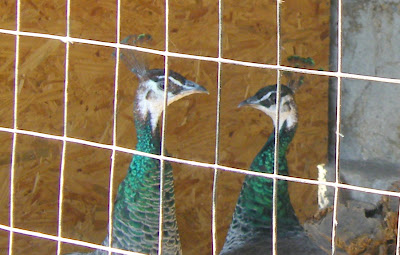 At the beginning of July, we took a ride to Hollywood Forever and I got some pictures of the very beautiful Peacocks that live there...At the time there were some very small Peacock Baby's........I don't know for sure, but they couldn't have been more than a few days or weeks old....Here they are, below back in July...... 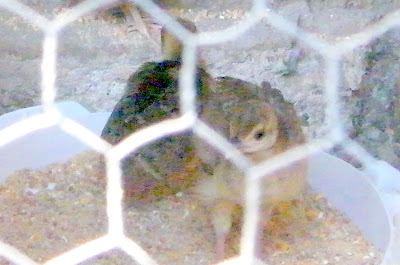 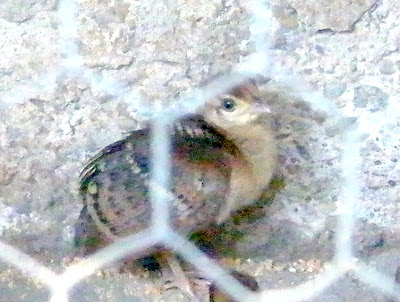 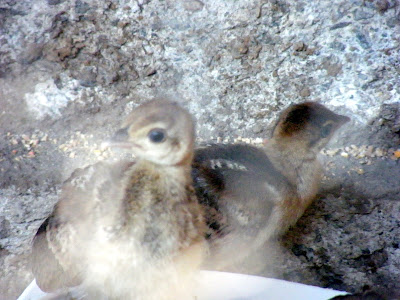 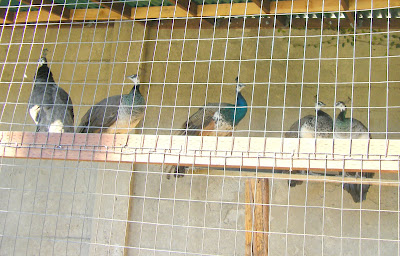 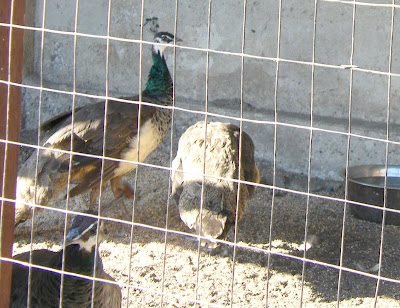 As always.....these were taken from the front passenger seat of the car....The sun was not completely co-operating, and the fact that they were all "cooped" up, having just returned from an outing of sorts...I think the pictures came out pretty good.....Here below, some of the beautiful elders.... 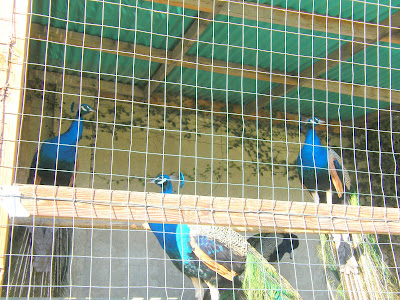 So Beautiful...The colors are just breath-taking.....Here below, more of Natures Beauty...... 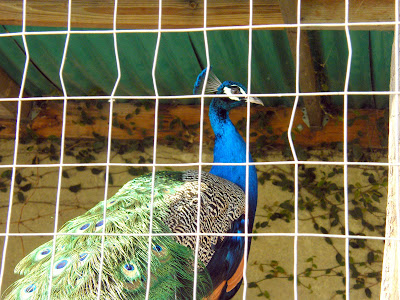 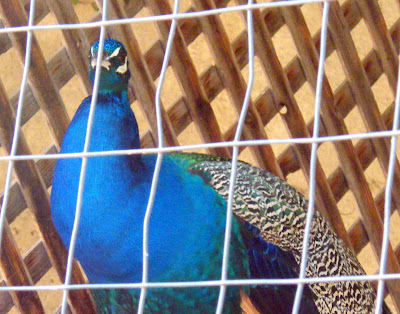 It doesn't seem possible, does it? I mean.....the depth of the color is astounding and to use an overused word---Awesome! Then....take a look at this, below...... 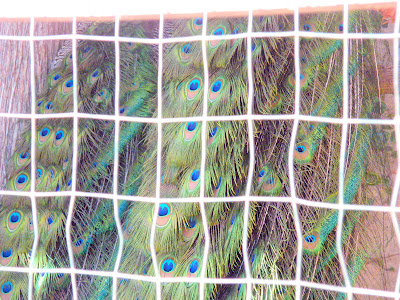 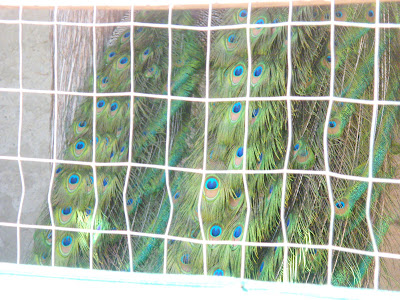 So amazing.....do click on these to see them bigger---you know...you click and then, you click again......It was a rather windy day and I could see the tail feathers moving in such a peaceful lovely way....I took a little short video of it....Enjoy!

Hi, Naomi. Lovely photos. They are so colourful, but noisy sons of bi***es!

I've never seen a baby peacock! How lucky you were to see one so wee! Aren't the colors amazing? Those blues and greens are my favorite anyway -- add them to something so majestic and it's not to be believed! How fun for you -- glad you were able to enjoy what looks like a fabulous time!

wow!.. the "elders" are gorgeous! and those "younguns" will be too soon! Really good shots Naomi!! (glad you got out of the house!)

Such stunning birds! Their plumage color is one of my favorites. To look at a party of peacocks is quite an experience in beauty and color. I can understand why it is the national bird of India and revered by Hindus.

On another note, I wrote the Oscars to tell them how dismayed I was with their omission of Betty Garrett’s name from the Memorial on their show.

SUCH gorgeous colors, and the chicks are really cute!

Great shots considering you took them from the car.

Gorgeous! You've inspired me. I'm going to see what's going on at the National Zoo tomorrow. Not sure they have any birds like this, but ver vaist?? I especially loved the photos of the bird's tail feathers through the fencing wires....Great eye!

Extremely vibrant colors with those peacock feathers. Nice to see the photos of the young chicks who've grown a bit.

Wishing you a pleasant Sunday.

I was offered peacocks many years back. My husband suggested quail are better. I appreciate that advice more now than then.

Looking at the stages of life I tought- Beauty is fleeting, is it not? From little chickees to peacocks and then maybe all that is left are feathers for a hat.

We had a peacock that lived along our creek. He obviously had belonged to someone who either let him go or he escaped. He was always looking for a mate and the wild turkeys were considered possibilities as he'd follow them around the pasture but they wouldn't give him the time of day. I have some feathers from his various molts. When he would call, it would sound as though we were living in a jungle. I haven't heard him yet this year but the wild turkeys aren't around; so he might yet show up. I do not know how old they live to be but he is in a region where wild things would definitely cut short a natural span.

I loved seeing the babies. Peacocks are so pretty but the sound they make is a bit scary. It sounds like a woman calling for help to me.
Thank you so much for your understanding and thoughtful comment on my post. It does hurt so much as you know too well.

Are you doing okay? You haven't posted your comments, so I was just checking.

So regal. I love to wear their colors. I agree the tail is moving in a shimmering sort of way. I love peacocks! Who came up with that?!

They are spectacular birds and their developement must be astonishing to watch. They are - as I renenber - quite vocal. I have no sound at present.

Oh my dear blog friend,
this is a fabulouse post.
You describe it all so well and ask as allways the right questions.

Sorry, I'm preparing for my retiree and as well hope to quit my Skin Cancer - it looks very positive..

I was worried when I saw you hadn't posted your comments. I was quite relieved when I saw them just now. Hope you have been OK.

Those are such beautiful birds. One can see why they were a favorite of royal menageries in the way back: a true symbol of royalty.

I love peacocks. You did so well to get such good shots through a car window. You can't tell at all. It looks like you've photoshopped the colours to make them stronger! Amazing. I won't say awesome! :D

I don't think I've ever seen a baby peacock before!

the blue of the adult is beautiful

dear naomi - i remember so well those magnificently beautiful peacocks from last year! and to see baby ones! what a treat! peacocks are so absolutely beautiful "in person" but your images are just as beautiful - thanks so much for sharing - hope all is well with you - seems my own distractions continue to keep me away from my blogging friends on the net, but not in spirit! hugs - j

Hi Naomi, glad you got out to see these lovely birds. The colors are so awesome, and especially that deep blue. Peacocks are very loud birds, but they are so magnificent!! Hope you are feeling better these days of March!! xox

Wow. I don' t think I've ever seen the little ones before. They soon seem to get their plumage and general magnificence!

Hardly the same thing, but the farmers around here brought the sheep back to close-by fields ready for the new lambs.

Peacocks are so vivid and beautiful, I always think of them as the sapphires of the bird world :)

I have never seen babies either. Beautiful blue. 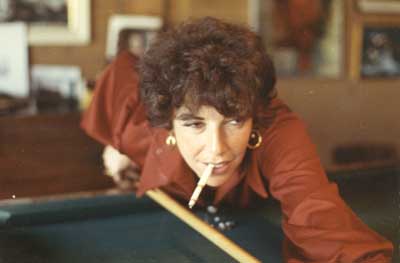